Share a memory
Obituary & Services
Tribute Wall
Read more about the life story of Robert and share your memory.

Medfield- Robert A. Collins, 79, formerly of Medfield died Sunday December 4, 2022 at Milford Regional Medical Center.  He was the husband of Jacqueline A. (King) Collins for the past 54 years.

He was born in Dorchester, the son of the late Edwin and Margery (Dawes) Collins and was a graduate of Hyde Park High School, Class of 1961.  Bob served in the United States Coast Guard Reserves from 1965 through 1971.  He went on to receive his Bachelor of Science degree in Business Studies from Boston University. His love of printing and graphic design started in his family’s business, The Royal Print, and spanned  many decades in a variety of ways and businesses, including marketing, communications, graphic design, and management. He worked for the Harvard University Printing Office from 1967 - 1985 as a manager of customer relations and marketing and dealt with all kinds of typeset and printed products. During this time, he was a director of the Harvard University Employees Credit Union 1975-1991. He then worked for On Cape Lithographers and ultimately opened his own graphic design business, STRC. In retirement he worked part time at the Suffolk County House of Corrections in the vocational education department as a Graphic Arts instructor.

Bob had a variety of interests. In his twenties and thirties, he was a jogger, cyclist, tennis player, and hiker. He loved the water and enjoyed taking friends out fishing in his boat. He was even known as “Flounder King”. He enjoyed traveling to Sint Maarten during the years he had a timeshare there, eating delicious food on the French side and the casinos and nightlife on the Dutch side. The last year he was there he got stuck between floors in an elevator and was rescued. After they pulled him out the family got to stay in a suite for the remainder of the trip. He said he took one for the team! On his fortieth Anniversary he and his wife went to Las Vegas and renewed their vows. The officiant was none other than Elvis - Bob’s choice. He even ended up doing a kick dance with Elvis. Basically, the most important thing to Bob was spending time with his family. He always looked forward to spending holidays with his granddaughters and daughters. Summers were especially favored because the family was always swimming in the pool, so was he. As much as he could, before Parkinsons showed up he attended sports and school events. This man loved his family.

A Celebration of Life will be held Friday, December 9 at 11:00 AM in the United Church of Christ, 496 Main Street, Medfield.  Burial will be private.  There are no calling hours.  All are invited to sign Bob’s online guestbook at www.collinsfuneral.com.  In lieu of flowers, please support the missions and ministries of UCCMEDFIELD, including Bob’s beloved Soup To Go program. Give by check payable to UCCMEDFIELD or https://pushpay.com/g/uccmedfield?src=hpp. 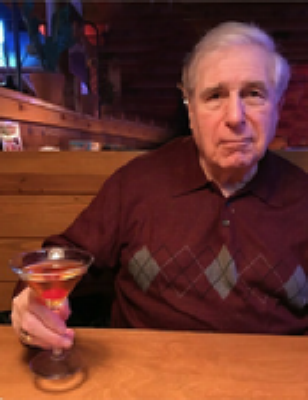